The idea to combine the passion of motor cycling with charitable purposes found its origin in 2002 and led to the creation of the Association of EUROBIKER Luxembourg on 3rd March 2003 under the chairmanship of Michel Turk, President of Luxembourg federation of motorcycle sport MUL and even 6 x winner of Luxembourg Motocross Championship.

Since 2003, EUROBIKER Luxembourg every year organizes a large tour through the countries of Europe - the EUROTOUR - with the motto: «Crossing borders and linking cultures».
The participants in this tour are all passionate motorcyclists from the most diverse professions and from various countries. Due to the quite tiring tours of about 3000-4000 km in 7-10 days the only condition for participation in the EUROTOUR is a solid driving experience.
One aim of the EUROTOUR, which led so far mostly through countries in Eastern Europe and Western Asia, is linking the different cultures of Europe and to permit our participants getting closer to new countries and mentalities. The visited countries/regions/towns/cities are mostly unspoiled by mass tourism and this is why worth exploring these beautiful and very interesting regions.


The main objective of the EUROTOUR is and remains the support of the most disadvantaged in our society: the orphans, the disabled and sick children. The participants of the EUROTOUR visit a such institution for children on every tour and with the luggage is carried a cash donation, which stems from partners, sponsors and private donors; of course also from the participants themselves, because the entry fee includes not only accommodation etc., but also a donation for the charitable objective of the EUROTOUR. The EUROBIKER spend a few hours with the children of the institution; they let them sit up on the bikes and can sometimes even take them for a short ride. This is always moving and memorable moments, which leave the children’s hearts beating higher if only for a few hours in often very sad day-to-day, and raise some feeling of movement to the bikers.

The EUROTOURS are official events; the patronage is taken over always by politically significant personalities who work primarily in the area of the European Community or in the foreign policy of the countries which they represent.
Generally, the EUROBIKER are received by national authorities in each of the visited countries The individual stages of the EUROTOUR are completed in separate groups of up to 8 motorcycles with each an experienced tour guide. Before entering a city where an official reception takes place, the groups join together and are accompanied by a local police escort to the city centre. Usually also press writers, radio or television station of the corresponding region contributing their part to public relations are present.


Another aim for EUROBIKER Luxembourg is to enhance the often negative image which is connected with the leather suits of bikers.

This bad reputation is owed the 1% of breakneck driving motorcyclists who seem not to know traffic rules. Therefore EUROBIKER Luxembourg is adamant that each participant respects the State-owned traffic rules during the tour and demonstrates reasonable motorcycle driving and behaviour. It is also a fact that most motorcycle clubs successfully organize many events in the charitable sector and thus the motorcyclist commonly is very social minded. 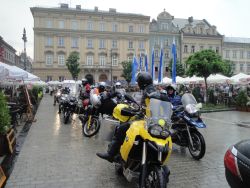 Finally, it was still noticed that EUROBIKER Luxembourg started 2 years ago to expand its sphere of action beyond the European frontiers. So, the "Ride of Cultures tour" through South Africa took place on New Year 2009 / 2010. It supported the project "Kick it! Choose life" of Rephele community in Pretoria to benefit the children in the "townships". Further tours through South Africa are in planning